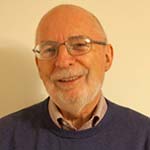 Cllr Freeth has lived in Hebden Royd since 1981 where he was Headteacher of Scout Road Primary School and now lives in Wadsworth in the Birchcliffe Ward. He has worked in education all his adult life having been Head of two schools in Calderdale, worked in international education in the Far East, the Middle East and Africa and finally, for 11 years, as a Headteacher in Bradford.

Speaking about his new role Cllr Freeth said: "I am honoured to have been elected to the position of Hebden Royd Mayor, to represent the communities of Cragg Vale, Mytholmroyd and Hebden Bridge. I am, and always have been, strongly committed to the idea that we are stronger and better served when working together as inclusive, mutually supportive communities and never more so than now as Hebden Royd recovers from the challenges of flooding and Covid 19 restrictions.

"It is important that no one feels left behind or forgotten as we move on from the challenges of the past and for that reason, I have chosen for my Mayor's charity the Forget Me Not Children's Hospice which supports children with life shortening conditions. This hospice provides, and has provided, support not only to some of the youngest and most vulnerable in our communities but also to their families bringing positivity and joy into their lives in the most challenging and difficult of times. Given my long career in education and experience of working with young people, I can think of no better choice for my Mayor's Charity than the Forget Me Not Children's Hospice."

The new Mayor will be supported in his role by Cllr Jane Hoyle who takes up position as Deputy Mayor of Hebden Royd Town Council.

Cllr Rob Freeth announced his consort for the 2021-22 would be his wife Helen Freeth and Cllr Jane Hoyle's consort is her husband, Kevin Hoyle.