Cllr. Richard Needham, on behalf of the Town Council would like to pay tribute and thanks to our outgoing Mayor, Cllr. Val Stevens. Councillor Needham said:
"Mayoral years are special - an opportunity to meet many people, fundraise, join celebrations, be out and about in the sunshine and crowds. Hopefully, a happy mix of formal duties and fun. 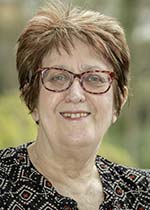 "From March 2020, we knew that we were all going to have a vastly different sort of year. A sad year. A year of tragedies and job losses. With children and students having their worlds turned upside down. Many in our nation became disheartened and frustrated as the months wore on. But not our Mayor, Councillor Stevens. She accepted the challenge of leadership, there was not a moan, but just humour and a determination to stay focused, work hard and make a difference. Never was she overwhelmed by challenges or disappointment.

"It was a quiet year for many organisations, but not the Town Council. With formal engagements at a bare minimum, she set to encouraging initiatives and constantly supporting people. She accompanied Cllr. Nikki Harvey to High Hirst to explore the possibilities of a Woodmeadow. That initial enthusiasm has led to fruit trees being planted and involved dozens of volunteers recently laying hedges. It is fast becoming a reality.

"She went out of her way to thank keyworkers for the work they do.

"She also established positive links with the leadership of Calderdale Council, Cllrs Tim Swift and Jane Scullion, ensuring we work together to tackle the challenges both of Covid and the severe budget cuts that Calderdale faces.

"With Mytholmroyd library due to close and that community losing its only public facing service, the Mayor has been at the heart of encouraging a strong local group in taking on a community asset transfer to create a revitalised library and hub for Mytholmroyd. Her pragmatism, commitment and her wealth of contacts, have been and are invaluable to this.

"Councillor Stevens chosen charity was the Hebden Bridge & District Old People's Welfare Committee and despite no normal fundraising events being possible, she has helped raise a significant amount.  But also, she has led the Age Friendly initiative at the Council and established the Age Friendly Working Party that is engaging elders on projects that they would want to support them and to enrich their lives. A lasting legacy.

"And finally, there was fun - she presided over the Rotary's quite different Duck Race with great humour and aplomb, contributing to an unforgettable video.

"The Town Council is enormously grateful for the energy, skill and huge commitment that Councillor Val Stevens brought to the role of Mayor, she was exactly what our community needed."