The economic, social, and environmental well-being of those who live and work in Hebden Royd will be a major factor in all our decision-making.

We are committed to a better quality of life for all the people of Hebden Royd. We plan to achieve this in association with community groups and the public, private and voluntary sectors.

Wherever possible, individuals and groups are encouraged to work in partnership with the Council to enhance the area to the benefit of the wider community

The original settlement was the hilltop village of Heptonstall. Hebden Bridge (originally Heptenbryge) started as a settlement where the Halifax to Burnley hilltop packhorse route dropped down into the valley. The route crossed the River Hebden at the spot where the old bridge (from where Hebden Bridge gets its name) stands.

The steep wet hills and access to major wool markets meant that Hebden Bridge was ideal for water powered weaving mills and the town developed during the 19th and 20th centuries; at one time Hebden was so well-known for its clothing manufacture that it was known as "Trouser Town". Drainage of the marshland which covered much of the Upper Calder Valley prior to the Industrial Revolution enabled construction of the road which runs through the valley. Prior to this, travel was only possible via the ancient packhorse route which ran along the hilltop, dropping into the valleys wherever necessary, as was the case with Hebden Bridge. The wool trade also brought the Rochdale Canal (running from Sowerby Bridge to Manchester) and the Manchester and Leeds Railway (later the Lancashire and Yorkshire Railway) (running from Leeds to Manchester and Burnley).

Hebden Bridge also grew to include a cinema and substantial offices for Hebden Bridge Urban District Council. There was some controversy about this as the land was originally intended to be the site of a swimming pool. Hebden Bridge still has no swimming pool, although for some years there was a small training pool for children in the adult education centre on Pitt Street. Hebden Bridge also had its own cooperative society. However, during the 1960s, it was defrauded and went bankrupt. The old Co-op building became a hotel and was later converted into flats. The Co-op returned in the 1980s with a supermarket on Market Street on the site of an old mill.

During the Second World War Hebden Bridge was designated a "reception area" and took in evacuees from industrial cities. Two bombs fell on Calderdale during the war, but they were not targeted, they were merely the emptying of the bomb load.
During the 1970s and 1980s the town saw an influx of artists, writers, photographers, musicians, alternative practitioners, teachers, green and New Age activists and more recently, wealthier 'yuppie' types. This in turn saw a boom in tourism to the area. During the 1990s Hebden Bridge became a dormitory town due to its proximity to major towns and cities in West Yorkshire, Greater Manchester and Lancashire.
In 1995, the singer Haddaway filmed the music video for "Lover Be Thy Name" in the Hebden Bridge area.[3]

At a district level, Hebden Bridge Urban District was established in 1891. In 1937, it merged with Mytholmroyd Urban District to become Hebden Royd Urban District. At a county level, Hebden Bridge was administered as part of the West Riding of Yorkshire. These were abolished as part of the reforms introduced in the Local Government Act 1972. They were replaced with West Yorkshire Metropolitan county, Calderdale Metropolitan Borough, and Hebden Royd Town Civil Parish. From a legal point of view, the town council is a parish council. 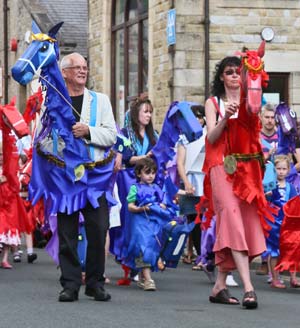 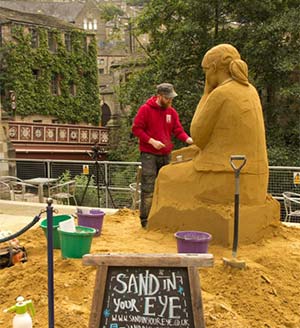 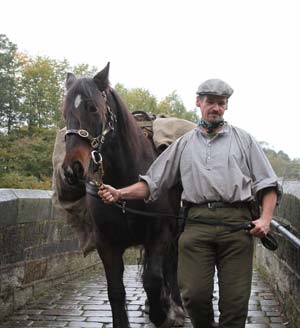