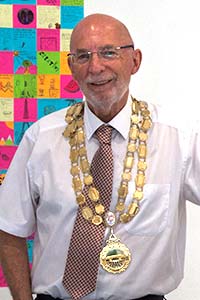 Cllr Freeth has lived in Hebden Royd since 1981 where he was Headteacher of Scout Road Primary School and now lives in Wadsworth in the Birchcliffe Ward.

He has worked in education all his adult life having been Head of two schools in Calderdale, worked in international education in the Far East, the Middle East and Africa and finally, for 11 years, as a Headteacher in Bradford.

I am honoured to have been elected to the position of Hebden Royd Mayor, to represent the communities of Cragg Vale, Mytholmroyd and Hebden Bridge. I am, and always have been, strongly committed to the idea that we are stronger and better served when working together as inclusive, mutually supportive communities and never more so than now as Hebden Royd recovers from the challenges of flooding and Covid 19 restrictions.

During my term as Mayor, Hebden Royd Town Council will act, within the limits of its powers, as an advocate and facilitator for our three communities to enable us to return to being the vibrant, inclusive and exciting place that we have all been proud to call our home, and which has been such an attractive area in which to live and to visit. In doing so I want to engage all the diverse parts of our communities and ensure that everyone feels that they have a part to play in our recovery as we move forward into 2022 following Lockdown.

It is important that no one feels left behind or forgotten as we move on from the challenges of the past and for that reason, I have chosen for my Mayor's charity the Forget Me Not Children's Hospice which supports children with life shortening conditions. This hospice provides, and has provided, support not only to some of the youngest and most vulnerable in our communities but also to their families bringing positivity and joy into their lives in the most challenging and difficult of times. Given my long career in education and experience of working with young people, I can think of no better choice for my Mayor's Charity than the Forget Me Not Children's Hospice.

The new Mayor will be supported in his role by Cllr Jane Hoyle who takes up position as Deputy Mayor of Hebden Royd Town Council.

Cllr Rob Freeth announced his consort for the 2021-22 would be his wife Helen Freeth and Cllr Jane Hoyle's consort is her husband, Kevin Hoyle. 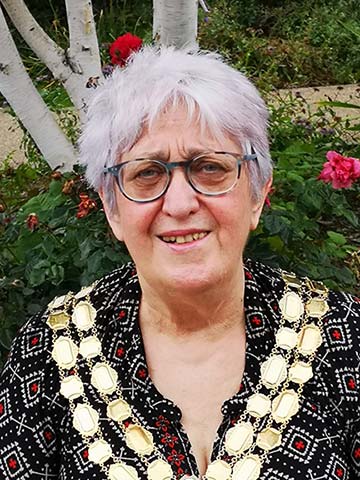 Speaking about her new role Cllr Stevens Stevens said: "I am honoured and privileged to become the Mayor of HRTC this year as it gives me an opportunity to develop the aims of the Council to make our community Age Friendly. This recent crisis has highlighted just how devastating Covid 19 has been to older people and therefore I have chosen the Old People's Welfare Committee as my charity for this year"
The Old Peoples Welfare Committee is an organisation that has been at the forefront helping others and their website www.opwc.org.uk has been a valuable resource for those in need of help and has set up ways to connect people with others who are also isolating or distancing, through telephone trees, letter writing, book clubs, and other 'virtual' ways of socialising.

The new Mayor will be supported in her role by Cllr Rob Freeth who takes up the position of Deputy Mayor.

Cllr Valerie Stevens announced her consort for the 2020-21 would be Cllr Pat Fraser and CMBC Councillor Susan Press and Cllr Rob Freeth's consort is wife Helen. 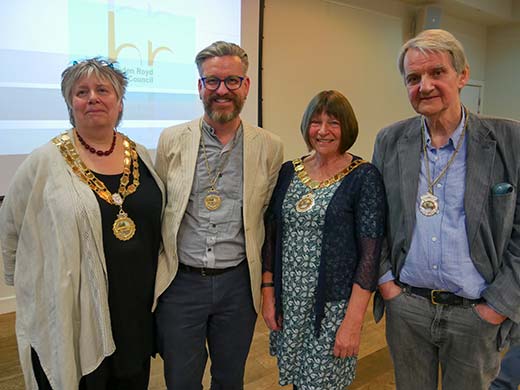 On Wednesday 15th May 2019 at the Annual Meeting Hebden Royd Town Council elected Cllr Dr Carol Stow as the Mayor for a second year, accepting the nomination from Cllr Scott Patient.

The Mayor said: “I feel hugely privileged to have been chosen by my fellow councillors to be their mayor for the second year in a row. I’m now looking forward to a second year getting out and about meeting the people of our wonderful area and hearing their stories.”

Cllr Dr Carol Stow continued: “This year the charity I will be supporting is CROWS - Community Rights of Way Service. This is a group of people, all volunteers, who repair and improve paths in our local area. So many people, both locals and visitors, gain immense social and health benefits from walking but we often forget that paths need maintenance and clear signing. CROWS quietly get on with maintaining and repairing paths, ensuring we can all continue to enjoy our magnificent local countryside.”

The new Mayor, who will be supported in her role by Cllr Sue Fenton who takes up the position of Deputy Mayor.

Cllr Dr Carol Stow announced her consort for the 2019-20 would be Dr Sean Pert and Cllr Sue Fenton’s consort is Rob Garrett. 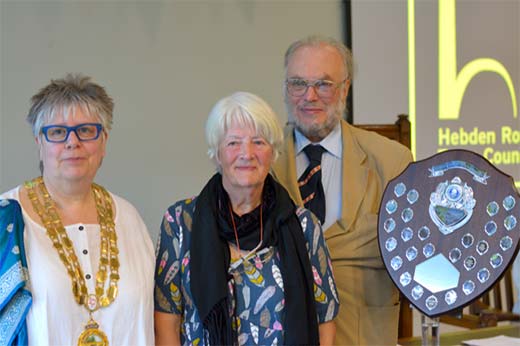 Hebden Royd Town Council elected a new Mayor at their Annual Meeting held in the Waterfront Hall, Hebden Bridge Town Hall on Wednesday 16th May 2018. Cllr Dr Carol Stow, who has held a place on the Town Council for the last 3/4 years was unanimously elected to the post and announced that her consort would be Alice Barford a friend of long standing.

Cllr Stephne Harrison will act as her deputy for the coming year with the help of her consort Roz Brown.

The meeting celebrated the achievements of the last twelve months and said farewell to the outgoing Mayor Cllr Pat Fraser.

Cllr Dr Stow announced that her charity for the year would be Slow The Flow who are working to protect the Calder Valley, and similar locations, from flooding in the future. 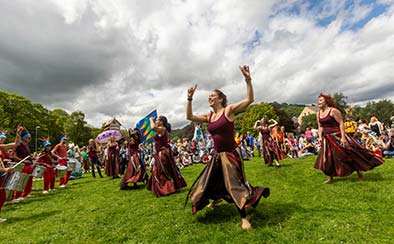